We have decided to add something Unique in terms of Fashion and Cosmetics. Therefor we added Tattoos which are treated as normal Fashion.

These Tattoos can be obtained at the NPC called: Tattoo Artist (531 634)

This is the first part of the Cosmetic Patch. You will be able to trade the new Items "Event Gold" from Event Shop to one of the new Tattoo Boxes at the Tattoo Artist.

These Boxes will randomly give you 1 from X Tattoos.

Note: The tattoos you will receive are always equippable to you, as the Boxes are divided to Male and Female

A little Preview of few Tattoos: 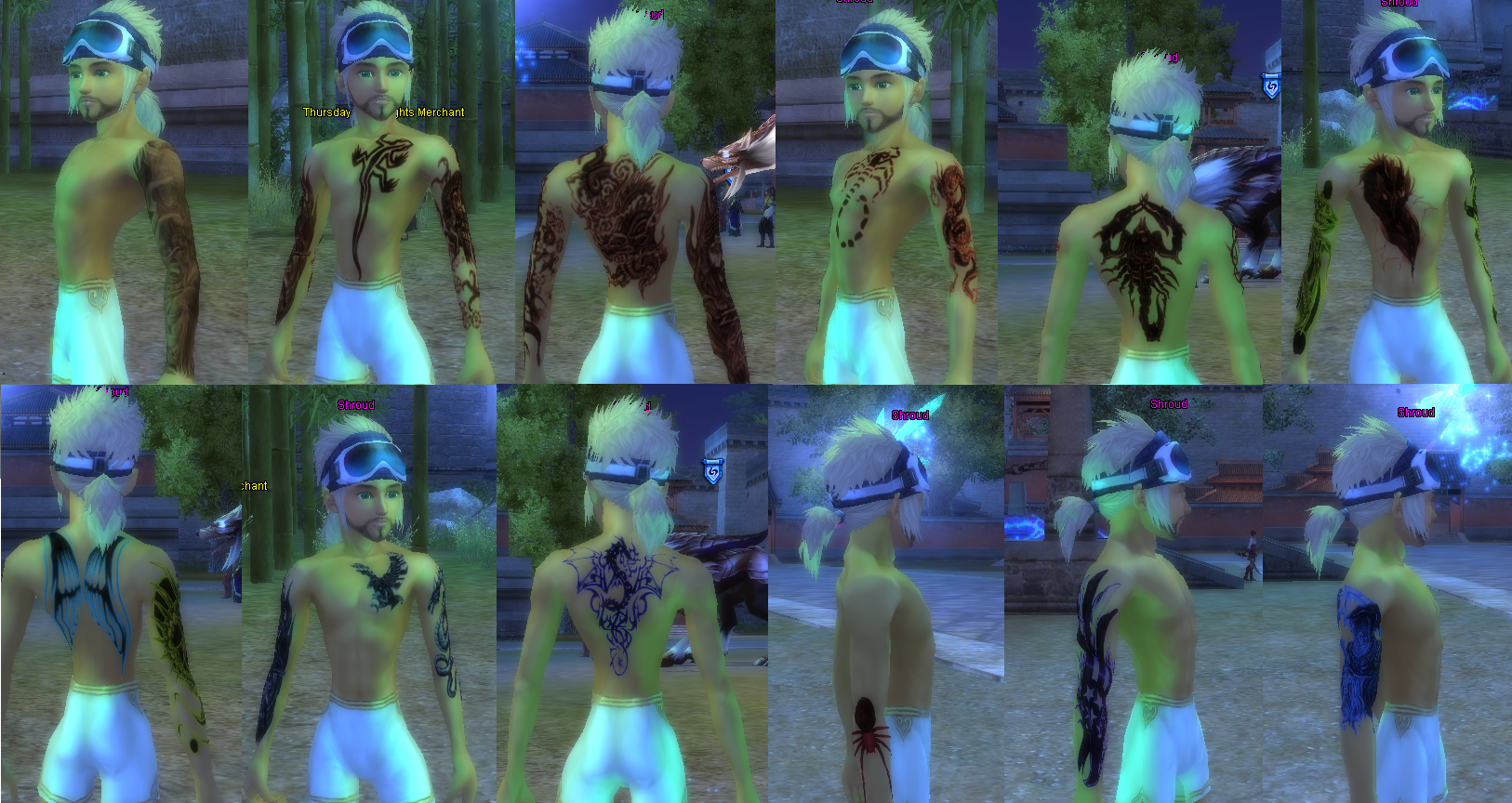 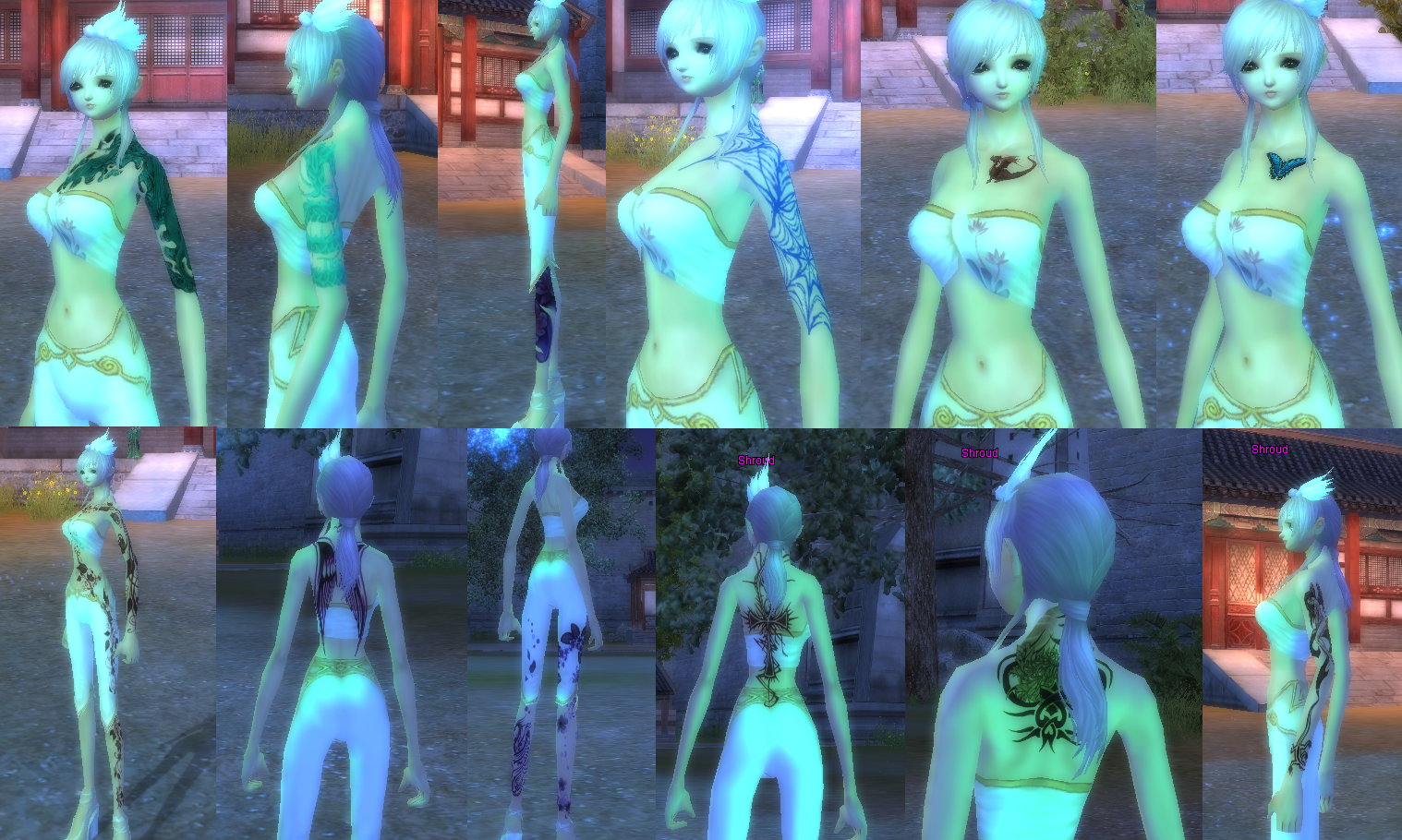 There are 40~50 different Tattoos for both male and female!

Note: You can obtain the Tattoos at the Tattoo Artist or via Cubi Shop. The Tattoo Artis has different Boxes available, depending on the Body position of the Tattoo, filled with different Tattoos. You may use "5x Event Gold Box" in order to craft one Tattoo Box, which will randomly drop 1 from X tattoos each time!

For a better overlook in your guild, we have recolourized the Guild Positions as well as the Online | Offline status

To make a little bit more visible the start on our server, we decided to recolourize the starting Title, everyone get as well as the Name being shouted

We thought it might be useful for some players, if the Damage Log was a bit more visible and not so uncreative and boring, so we customised it a bit to look like this:

Accessory Stone, was increased in quantity from x1 to x5 for 50 silver.

Corgi Battle pet will now be able to evolve. In case you own a Corgi Battle Pet, that can't be Evolved mail it to Raven, and you will receive a new Corgi Pet for free

There is a new Item called "5x Event Gold Pack" which is undroppable, untrade-able, can't be put in Stash and is mainly used for future "Lottery Items". In case of this Patch it will be Tattoos

The stay online reward was changed to require MINIMUM level: 30 in order to start obtaining it. To prevent quite few abuses and exploits

The Weapon Tabs on Rank 9 and Rank 9 (PvE) were re-named to: That way nobody has an excuse anymore about doing a mistake or a missclick.

Note: The Staff won't help you with your missclicks and overlooks, after this Patch. It's more than clear now what is what, aside of the fact that PvE weapon were colourized differently and called differently (Having PvE in their name) should've been already clear.

Fortification Essence, can now be crafted at bigger stacks in order to prevent the "Server Error" message, when crafting many things too fast at the Fortification: Engrave Forge

Molten Mines is finally ready and all items are craftable. There were few changes done, depending on the suggestions and recommendations, that we received within the last few weeks during the Test Phase of the Dungeon.

You can now check the re-worked Molten Mine Guide here: